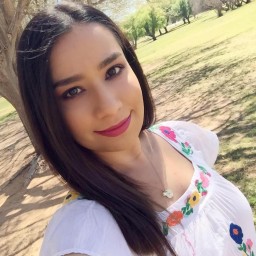 I'm a food enthusiast with a passion for Latin American cooking and a desire to experience cuisine from all around the world. I love entertaining and sharing this passion for food with friends, family, and strangers alike.

Charro beans with quesadillas and fresh avocado slices – my favorite of all comfort foods. These beans are full of flavor and by making a large pot, you can feed the entire family! Serve charro beans as the main course with tortillas or as a side of your favorite Mexican dish. Ingredients: 4 cups, uncooked pinto beans 12-13 cups water 1 1/2 cups sliced wieners or Spanish chorizo (Spanish chorizo is… Read More

A great salsa is essential when serving a Mexican meal; I can’t eat without it! This fried jalapeño salsa is perfect for chicken or steak tacos. It’s spicy, creamy, and full of flavor. To top it off, it’s simple to make and you’ll only need a few ingredients. Ingredients: 10 Jalapeños 2  garlic cloves 1 cube chicken bouillon such as Knorr, which can be found in the Latin section of your grocery store 1/4 cup… Read More

If you’re a fan of green chicken enchiladas, then this recipe is for you! Green Chicken Pozole is also very popular around the holiday season and it’s perfect for those guests or family members who do not eat pork or beef, most common in red pozole and menudo. But you may want to double the recipe; everyone is going to want some! Serves 4 4 cups white hominy 2 large chicken breasts… Read More

Champurrado is a Mexican atole made with chocolate, spices, and masa de maíz, or corn flour. It’s a thick version of a hot chocolate but with a unique flavor that can only be attained by using Chocolate Abuelita, a brand of Mexican chocolate and piloncillo, a cone made from unrefined sugar. Champurrado is made during the holiday season and pairs well with sweet tamales like pineapple and pecan! Give this a try… Read More

Tacos de discada are very popular and are often made for large parties and family gatherings. The name derives from the pan used to prepare the meat, a disco, or disk, made specifically for cooking discada. At parties, the disk is set somewhere outside and guests can stand around and watch as the pork, beef, and chorizo sizzle to perfection. Though a disk can be purchased at many Latin American grocery stores,… Read More

Camote enmielado is one of my all-time favorite Mexican desserts. It’s sweet potato cooked in a cane sugar syrup, served warm and topped with evaporated milk. You can find piloncillo  in the Latin section of your grocery store or order it online. Ingredients: 2 sweet potatoes with skin, sliced in 1 inch pieces 1 piloncillo 1 cinnamon stick 1/2 cup water 1 can evaporated milk – In a medium sauce pan, add 1/2 cup… Read More

Every time my mother asked what I wanted for dinner I would reply, “Pollo en salsa de tomate!” Chicken and vegetables in tomato sauce has been one of my favorite dishes since childhood. You can control the spiciness by adjusting the amount of jalapeños or not add any at all but in my opinion, the spicier the better! 6 boneless, skinless chicken thighs 1 cup thawed peas 1 1/2 cups cooked cauliflower… Read More

Homemade red enchilada sauce is very easy to make, so unless there are no dehydrated chili pods available in your supermarket, there’s no need to buy it canned. You might find the chile pods in the Latin section of your grocery store prepackaged and labeled, mild, medium, or hot. It also freezes well so you can make a few cups at a time and store them in plastic containers or freezer bags…. Read More